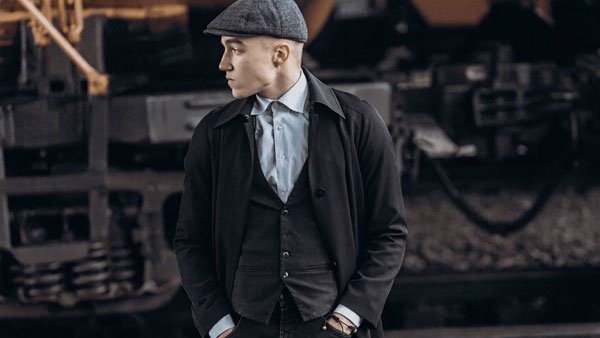 If you’ve watched even a single episode of Peaky Blinders, you’ll probably understand why so many people are hooked. The plotlines are intricate, and the characters are fascinating, and the show has become known for its meticulous attention to historical accuracy, from the gloomy background of industrial postwar Birmingham to the authentic costumes that define the Peaky Blinders’ iconic style.

How the English style of dress evolved

Some people are fond of saying that history tends to repeat itself. Right now, the Peaky Blinders on-screen style is creating a noticeable ripple effect across UK menswear, with a renewed interest in thicker wool fabrics and accessories like baker boys caps. The fascinating thing about this is that today’s ‘Peaky Blinders effect’ mirrors a similar craze that once spread across the rest of the world – a craze that focused on English formal style.

With each new series, the setting of Peaky Blinders is making its way through successive years of the 1920s – a particularly interesting era for British sartorial history. In fact, by the 1920s, our national ‘look’ was gradually detaching itself from the morning suit, often regarded as the very height of formality. Instead, the nation was increasingly turning to the slightly more relaxed lounge suit, which is the modern staple of formal wear. The defining features of the lounge suit included wide, unpadded shoulders, a hip-length straight-fitting loose jacket, two large pockets, and between one and four buttons closed at all times.

In the words of industry expert Martin Pel, British men were perceived on the international stage to be amongst the most sartorially elegant, and global style trends were often set on by the English elite on Savile Row.

How this influenced the style of Peaky Blinders

As we’ve touched upon before, the various styles of dress seen on Peaky Blinders serve as subtle reinforcements of the characters’ personalities. For example, gang leader Tommy Shelby dresses with that enviable trademark English sophistication, reflecting his dearly-held ambition to be seen as part of English high society. His brother Arthur holds no such aspirations, and as the gang’s enforcer he is far more comfortable in rougher, heavier suits more becoming of the business class.

Despite the differences between the two, though, you might notice that they’re equally partial to the increasingly popular lounge suits, which is widely recognised today as standard business and formal wear. In fact, if you’re watching the episodes closely, you can see how increasing numbers of main and background characters are starting to favour three-piece lounge suits over the previously-popular ‘morning suits’, which are today generally only used for ultra-formal occasions like weddings and business events. (Although you may recognise them from period shows such as Downton Abbey.)

Generally the lounge suits you can see on Peaky Blinders incorporate high-waisted trousers with pleated fronts that finished just above the shoe. They were cut like this to prevent the hem from ever reaching the ground. The explanation for this is a practical but unpleasant one – back in postwar Birmingham, sewage systems were still developing, so you really didn’t want any of your clothes touching the ground unless they absolutely had to. Shirting fabrics, on the other hand, included classic solid white fabrics, or sometimes simple stripes. Meanwhile, coats tended to use heavier wool fabrics to ward of the chilly, damp weather in postwar Birmingham. As with many elements of evolving British style, this was rooted firmly in the country way of life, where heavier fabrics and tweed were especially commonplace.

Another aspect you’ll probably notice about the Peaky Blinders’ style of dress is their proclivity for waistcoats. The type most commonly seen on the show are high-fronted waistcoats, which can sometimes have as many as six buttons. They were typically tight-fitting to suit the contemporary suit trend of the time, and were an alternative to the far more expensive tie pins. Most of the English upper classes favoured tie pins as a way to keep their ties in place, but these expensive accessories often made use of precious gemstones or metals, putting them far out of the reach of the lower classes. So, these men turned to waistcoats instead.

Like most lower-class men of the time, the Peaky Blinders instead rely on small glints from pocket watches or chains to give their outfits a touch of class, without straying too much into outright opulence. In fact, even if a man wore a wristwatch, wearing a vest without a pocket watch was considered shoddy.

While we’ll leave the accessories up to you, here at Acorn we can certainly provide a huge range of fabrics perfect for creating the very image of the Peaky Blinder style. You can browse our wide array of fabric types here, or browse our formal wear category to get some inspiration on how to create your own twist on the classic three-piece lounge suit. If you need any help or advice we’re only a phone call away – feel free to ring us on 01282 698 662!