A quick introduction to sprezzatura

Given its eternally-enduring popularity and almost endless interpretations, there’s a good chance you may have already heard of sprezzatura. It’s an Italian idea that espouses the notion of studied nonchalance in personal style; an unrehearsed grace that looks so natural as to be almost accidental. As you can imagine, that makes it a highly desirable style for many of us, and the good news is that as long as you understand the principles, it can be quite easy to pull off.

As experts in cotton shirting fabrics and personal tailoring ourselves here at Acorn fabrics, we’ve got our fair share of experience with this unique style, and in the coming weeks we’ll give you the inside scoop on the dos and don’ts on trying to achieve it. In order to properly master sprezzatura though, first it’s important to properly understand what goes into the concept.

Sprezzatura: the style that defined a new chapter fashion history

The concept of sprezzatura is centuries old, first appearing in a publication called the Book of the Courtier by Baldassare Castiglione (1478 – 1529). Painstakingly written over the course of about twenty years, the book aimed to educate noblemen of the Italian courts on the proper bearing, manner and composure for courtiers, from the way they conducted themselves to the style of their dress. Whenever sprezzatura is discussed, you’ll likely hear one quote in particular, in which Castiglione refers to “a certain nonchalance, so as to conceal design and make whatever one does or says appear to be without effort and almost without thought.”

It’s this quote which most neatly sums up sprezzatura, and the principles that underpin it; that idea of studied nonchalance, of cultivating a supremely distinctive style by appearing so laid back and relaxed as to give the impression you’ve achieved it almost effortlessly. It’s not hard to see why it’s always been such a sought-after style throughout the centuries. An early champion of it was the noted 19th century British style icon Beau Brummell, who was so taken with the notion of sprezzatura that he was rumoured to have spent hours in front of the mirror adjusting his cravat as to ensure his dress looked properly unrehearsed. It’s an extreme example, and not one that we’re necessarily suggesting you emulate – after all, you could argue that it defeats the whole point of sprezzatura! If it’s something you’d like to adopt for your personal style, rest assured that perfecting the technique will come with practice.

The appeal of modern sprezzatura

Sprezzatura has proven itself to be more than just a fad. It’s evolved steadily over the past 500 years, and today it’s still a major fixture of modern style. It lightly subverts mainstream style trends by breaking the rules in small but noticeable ways. A long-established one has been to have the back blade of your tie longer than the front, which some people otherwise view as a mortal error when it comes to style. Other modern interpretations involve wearing wristwatches on the outside of shirt cuffs, or mixing a double-breasted jacket, a brushed wool and cotton shirt and tie, and a pair of sharp jeans. That idea of rakish imperfection, of poking fun at traditional ideas of style while still acknowledging and respecting them, has made sprezzatura especially popular with young men. 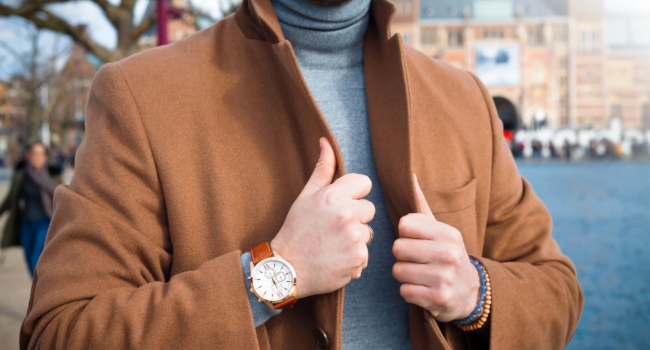 Perhaps one of the greatest things about sprezzatura is that it’s a fun way to experiment with your look while keeping within the boundaries of acceptable style. By adopting it, you’re showing that you’re not ignorant of the traditions – you’re consciously rebelling against them, distinguishing yourself from the crowd without being brash or garish about it. In terms of fabric choices, a double-brushed twill fabric like Sterling Grey is an excellent fit for sprezzatura, blending undeniable quality with an understated appearance.

Of course, successfully adopting sprezzatura is a bit more complex than that – but we’ll go into that in a bit more detail in a future post! In the meantime, if you’re looking for the ideal cotton shirting fabrics to perfect your own personal style, you’re in exactly the right place. Here at Acorn Fabrics we’ve got a huge range of fabric types, with warm winter checks proving especially popular as the weather gets even chillier. You can browse them right here on our website, or alternatively give us a call on 01282 698662, and we’ll be happy to help however we can.